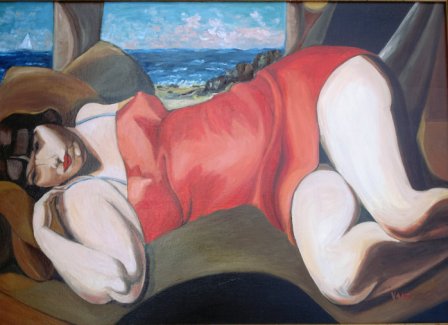 Time on Fuerteventura: since 2006

In Fuerteventura Valeria already exhibited at the Mall "El Campanario" of Corralejo, at the La Oliva Municipal Art Center "El Toston" of El Cotillo, in the gallery “La Fuentita” in Corralejo and in the “Centro de Arte Juan Ismael” in Puerto del Rosario.

Valeria mainly likes the figurative painting and the Impressionist style, with some references towards the Expressionism and the geometrical style, ranging from cut off flowers paintings to portraits in Liberty style. Valeria also realizes lots of paintings inspired to the Fuerteventura landscapes. Tel.: 0034 696 762 158, E-Mail: This email address is being protected from spambots. You need JavaScript enabled to view it.