The history of the local wasp - Fuerteventura

The estimated age of Fuerteventura as an island is some 18-20 million years. The earliest formation is thought to be Tindaya, reckoned by its material which differs significantly from that of the rest of the island. The mountain Tindaya is a large lump of Trachite, whereas the Betancuria massif is Basalt based. One million years is along time and although not populated by humans, Fuerteventura was the home to many species of plants and animals that we will never guess how they looked or grew. However, there is one instant that has left its traces. 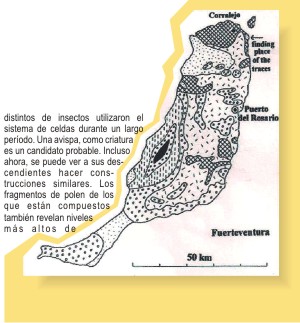 You can find in the North of the island, in the dunes area and around Tindaya and Caleta /Antigua large deposits of fossilized insect cases. These are nests of a creature long extinct and are a record of the difference in climate, the flora and fauna in ancient times. Studies of the cells have determined that different types of insects used the cell system over a long period. A wasp like creature is a most likely candidate. Even now, one can see their descendants making similar constructions. Pollen fragments in their make up also reveal higher vegetation levels and what would have been a much wetter place as these wasps needed fresh sweet water for their constructions. No fossil remains of the insects that made the cells have been found but based on the vast amount of cells one can find, there must have been millions of wasps and an abundance of flowers.

The landscape of our island today is very different to the view that met the early settlers. There were many trees and a lot more plants covered the hard rock surfaces we see today. Although the climate changed over time and there were wetter periods, the Fuerteventura eco-system always was very vulnerable to excess exploitation; by animals or by mankind. This was caused by the limited amount – even in wetter periods – of regular fresh water supply and, thus, a limited capability of regeneration of the local flora.

Many factors were to cause the latest destruction of the local eco-system. The intense production of goats that eat almost every plant and the need for wood as fuel and for construction eliminated the scarce amount of trees. During the 18th century the rainfall also reduced dramatically. Once the trees were gone, the fertile soil blew away and the ground plants died. Within a very short time the island became a desert…and the wasp almost became extinct.

Bernie power is at the Tindaya Arms bar. Info: www.tindayaarms.com 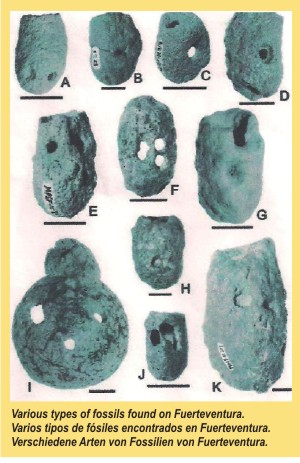 Bernie at the Tindaya Arms bar in Tindaya has a large collection of the most unusual specimens and always is pleased to discuss this subject further in his bar.