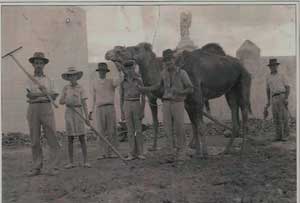 This picture of a farming group from the late 1950s appear as a rural scene and when you look behind them you will see a grand marble angel. This statue can be seen as you go past the cemetery at La Oliva, in the North of the island. The farming group is standing in what is now the cactus garden, opposite the petrol-service station in La Oliva. This cemetery is less than inspiring with very little info. Nowadays the coffin is placed in a wall and bricked up but there are many traditional graves. One of the most interesting and the most ancient ones lies

beneath that very same angel. 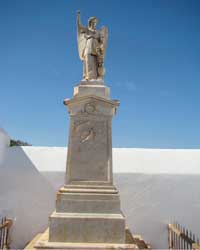 The angel is a replacement monument for one of the most famous people buried there: the very last Colonel of the island, Cristobal Manrique de Lara Cabrera. He died on 5th Sept 1870 and had the right to govern taken away in 1856. However, he retained ownership of virtually all of La Oliva until his death.

Since they took control in 1702, the Cabrera Bethancourt family passed military and political rights from father to son. Gines Cabrera Bethancourt started to build the Casa de los Coroneles and it was to be a symbol of their power and wealth for 150 years. Finally, it was completed by his grandson, the 5th colonel Augustine Cabrera Bethancourt Umpierrez. When he died in 1828, things were changing for the Colonels and their power base in La Oliva. By the 1850s the capital and commercial centre was to be the port town of Puerto de las Cabras.(Goat’s port), now known as Puerto del Rosario after the Virgin who has her church in the town centre. 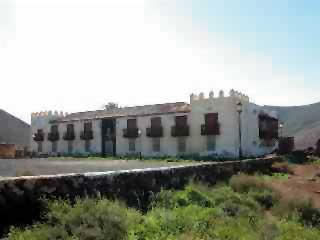 The angel on the tomb seems to be gazing at the famous house and estates of Los Coroneles, restored but sorely under used. When Cristobal died, the house was a large financial burden. As well as the family, it once had 100 retainers and grooms for the horses, etc. It employed Cooks, Butlers, and Maids and had all the retinue of a powerful head of the military government. However, the cost could no longer be met through the taxes and tariffs previously available. The last inhabitant was his youngest daughter Maria de las Nieves, who had married and become the Marquesa de la Quinta Roja, an aristocratic house in Tenerife. Her husband suddenly died at the age of 39 and she was heartbroken. She came to stay at the house by 1880 and mostly lived there until she died in 1921. So for many years the place was called the Casa de la Marquesa.

By this time the house was too expensive for anybody to use it and slowly it was stripped of the grand furniture, the tapestries from the walls, and the paintings and artworks collected since the 1600s by the family. The workers were left to find employment in the port town and the house decayed and was robbed until only a shell remained.

Fortunately, a group (World Heritage Organisation) worked hard to conserve and restore one of the most unusual architectural creations in the Canary Islands. It was given back its original name, once more to become the Casa de los Coroneles.

Seen here before and after restoration which was finished by 2006, the house was opened by King Juan Carlos I in Nov of the same year. The outbuildings are still as they were and in a very dilapidated state but there are plans to repair the whole of the estate. It will be very expensive but for sure it will be a memorable thing to do and an heirloom for the whole of the island. However, there are so many other marvellous places that it seems a race to save them all in time.

This and many other subjects are discussed every Weds and Fri at 2.00 pm when Bernie at the Tindaya Arms in Tindaya has his history talk. Phone 928-865-595 for details.