San Borondón – the search for a mysterious island.

The island of San Borondón is probably the most intriguing one to all inhabitants of the Canary Islands. Its legend is part of the local culture and the quest for it is a never-ending story, even today with all the technology available.
For ages, the island was called in many tales, ballads, poems and folkloric songs “the mysterious one, the lost one, the unreachable one”. Based on those persistent rumours, many expeditions were initiated from the 15th till the 18th century – the most known was in 1721 under Juan de Mur y Aguirre, an admiral – and many naval maps were drawn.

+Pizzigano drew a map of San Borondón in the 15th century, Toscanelli in the 15th century and in the 16th century the engineers P. Cazorla and L. Torriani drew a detailed map of the island which, according to them, should measure 480km by 155km (that’s a big island!) and would be located 550km NNW from El Hierro and 220km WSW from La Palma. The historian Abbey Galindo even located it on 10º10’ West; 29º30’ North. But the island – obviously – was never discovered and has led to many controversial polemics.
Already during the Greek era, legends about emerging and disappearing islands were popular, as they were fed by calamities like the destruction of nowadays Santorini. Furthermore, according to a poem of the 6th century AD, an Irish monk Saint Brandan de Clonfert (480 – 576) embarked with 14 other monks into the Atlantic till they landed on an island. When celebrating mass and starting a fire, the island began to move and it turned out that the island was a gigantic whale. They left the island, returned home and the legend was born. 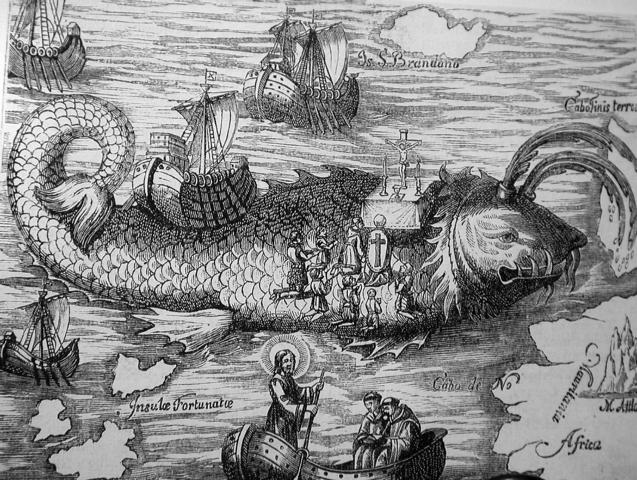 In order to understand the magic during the Middle Ages that was generated from an unknown or mysteriously disappearing island, one can compare this with what we sense today about our quest for unknown exo-planets. And, today, we do have pictures and/or measurements of these objects available to control our imagination. At that time there was no possibility to generate exact data, except the very landing on the island itself. There are some stories that document a landing on an island that was inhabited and that frequently was haunted by suddenly upcoming stormy weather. Some other stories tell about the sighting of an unknown island to the West of La Palma, La Gomera and El Hierro, but when approaching it, it became suddenly covered by fog and then disappeared. So it came that this disappearing island got the name of the originator of the legend of disappearing islands: Saint Brandan or – in Spanish – San Borondón. The legend began to make its own life as in 1479 it was officially included in a treaty between Spain and Portugal, claiming it to belonging to the Canary Islands and thus to Spain. The notion of the 8th Canary Island had begun, and so the search for it.
As many examples in the past have demonstrated, there can be some truth in the sighting of this island, whether it was by a meteorological event – a Fata Morgana – or by a correct sighting and a later misinterpretation about its location. After all, the legends of dragons have been fed by ancient discoveries of skulls of dinosaurs – maybe even of the Tyrannosaurus Rex – but at that time those who found or studied them could not interpret them correctly.
In the case that the sighting was a Fata Morgana – and modern meteorological knowledge about local weather patterns seem to allow for such an event – the image that would have been seen could have been that of La Palma. The silhouette of the island could match with some drawings from that period.
A variation on the theme of Fata Morgana is that the undisturbed area between the 4 Canary Islands – La Gomera, El Hierro, La Palma and Tenerife – and the islands “Las Salvajes” that are situated some 165 km to the north of Tenerife, allows for a rare phenomenon called “Atmospheric Reflection” which means that on some slightly foggy days the sunlight reflects the image of the larger island onto the clouds, which they in turn reflect it back on a foggy sea surface near the 4 islands which will give the impression that the image is close by one of those 4 islands. Some kind of optical billiard.

In the case that the sighting was genuine, we have to look for the data from then and try to match those with what we see today.
the island should lay in the West of the archipelago / the North of Tenerife

there should be 3 mountains, divided into two dominating mountain groups, with in between a forest the island was defined to be inaccessible and could disappear in fog or clouds a map of the 17th century located San Borondón to the north of Tenerife one drawing shows an island with an oval shape, another one shows an island with an elongated shape
some sightings have been reported from the north shore of Tenerife

If we use Google Earth® to search for candidates, we end up with Madeira in the NNW, Las Salvajes in the NNW, and – a lot further away – the Azores in the NNW. The group of islands, closest to the Canary Islands are the Salvajes which comprise of two groups: one island that measures 1,5x1,5 km and a group of tiny islands that altogether span an area of about 2x2km – 15km below the first group. The largest island has an altitude of about 163m and the group of smaller islands is covered by the sea at high tide, but shows up by low tide at full or new moon with an altitude of some 2m (!) Due to the round shape of the earth, one can only witness this phenomenon from the proximity, meaning a couple of miles. But when reaching the area with a sailing boat after a couple of hours, the lower island already could have flooded again due to the tidal movements…
The shape of the largest island of “Las Salvajes” corresponds greatly with one of the drawings that were made in the 17th century. If you take into account that the submerged islands could have been interpreted from a distance as one island, then this imaginary island would have the shape of the documented elongated island. The island group “Las Salvajes” now belong to Portugal. The main island has no potable water, is desert like with a rocky soil, has steep and cut out shores and treacherous reefs which makes it almost inaccessible. It has three mountains (!), the highest one measures 163m.

Hallucination or wrong interpretation of real sightings, whatever the correct story would be, it has given us an entertaining legend that continues to exist, even after a thousand years. Sound culture is made of this kind of traditions.