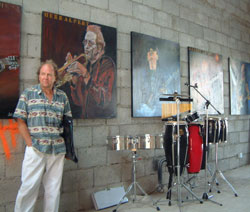 Charly is on the road as a photographer and designer since 35 Years. He started as a photographer for advertisements, then as a journalist and later for architecture – now as multi-media artist. He was hired in 1976 to get the at that time 5-star hotel “Tres Islas” and the surrounding marvellous beaches into the Holiday-Destination-Champions-League*. Since 1981 Charly was a wanted photographer for the powerful surfing and later for the mountain bike industry. He managed to squeeze in his busy agenda side-tracks to Alaska for picturing the dog-sledge racing, to India or to Kenya for the Rallye.

He designed the presentation brochure of a Munich-based production company that received the Hollywood-Oscar for the best foreign movie in 1979. This event gave birth to Charly’s idea: “Once I will do that too, as a creator”. And now, after 30 years, cult director Klaus Lemke has made with Charly the dark comedy movie “Three crosses and a bestseller”, to be launched in 2011. Charly: “If everything goes according to plan, then this movie will have a significant impact on the promotion of this island.” * New prints from the original are available from Charly.
Spirit: “And what are your plans for the future?”
“Our next movie on Fuerte has already been planned to be taken in December. Another adventure movie about a very sensitive and actual theme is planned to start soon. Preliminary talks are done and relevant locations have been selected already. I am preparing a moving exhibition about “35 years of Windsurfing” and I am searching for partners and sponsors (contact: This email address is being protected from spambots. You need JavaScript enabled to view it.). And – last but certainly not least – I am expecting/hoping on world-class architecture on the Canaries.” Architecture is Charly’s passion. He is proud that recently Portugal chose one of his pictures as a motive for one of their stamps: the control tower of the Lissabon harbour. Beautiful architecture is like a wanted business card.
Charly: “By the way, I do have some words for our local politicians here. I think I am entitled to some opinion