The Majorero Cheese of Fuerteventura.

The name "Denominación de origen Queso Majorero" is protected by the Spanish State in 16-05-1996 and by the European Union since 20-02-1999 and applies to the types of cheese that are made of goat milk and in a specified artisan way. The "Consejo Regulador de la Denominación de Origen Protegida Queso Majorero", part of the "Gobierno de Canarias" is constantly monitoring the quality of the listed products.

In "Queso Majorero" the word Majorero comes from the ancient name "Maxorata", the name of the old kingdom in a part of Fuerteventura. In a document of 1402 the original inhabitants were described to be feeding themselves with goat meat, Gofio and cheese. Already at that time the quality of the cheese was highly appreciated by the Normandy expedition.

The "Queso Majorero" is elaborated uniquely on Fuerteventura and only with raw and/or pasteurized milk from goats of Fuerteventura origin, whereas for the cheeses to be cured, some addition of max. 15% of milk from the Canarian sheep is allowed. Only milk from healthy goats and sheep from listed farms are used. This milk is free from impurities, pharmaceuticals and preservatives that can have a negative influence on the quality of the cheese. 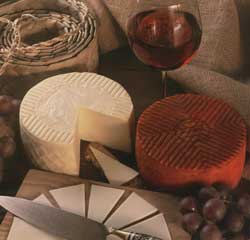 The specifications of the "Queso Majorero" are:
• Cylindric form with a height between 6-9 cm, a diameter of 15-35 cm and a weight between 1-6kgs.
• An imprint with the name of the cheese factory on both base sides of the cheese by the moulds used to form the cheese and a pattern on the lateral side of the cheese.
• The "Tierno" has a white colour; the cured ones have a yellowish colour.
• The cured ones can have an addition of oil, ground paprika or Gofio onto their surface.
• The body is compact with no or little openings, it has a creamy texture, the taste is somewhat acidic and spicy.
• Queso Tierno: has a light curing of only 8 to 20 days, no additional coating.
• Queso Semicurado: has a medium curing of 21 to 60 days, no coatings or those with oil, paprika or Gofio.
• Queso Curado: has a full curing of more than 60 days, no coatings or those with oil, paprika or Gofio.

• Tierno: light digestible; for breakfast, snack and as dessert with some honey.
• Semicurado: tasty and relatively light; with an aperitif, a perfect companion with wine and an all-rounder.
• Curado: very tasty and compact; ideal as a side-dish during a rich meal or as a closing element of a dinner.
• Viejo: the most cured cheese with a pronounced taste; for sampling
• Paprika Coating: has a red skin and a spicy twist.
• Gofio Coating: has a brownish skin and a soft taste of roasted flour.
• Smoked: with a taste of smoke

The cheeses can be eaten with a good white wine like a Sauvignon Blanc or with young reds like Beaujolais. If you eat the cheese for dessert, then a sweet or pale cream sherry like Palo Cortado is recommendable. 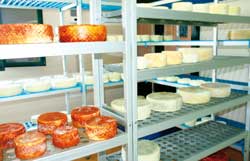 The classification of quality in order to achieve the "Denominación de Origin Protegida (D.O.P.)" happens according to severe and fixed criteria. The criteria are listed below:
• The external appearance of the cheese,
• The sound: sometimes there are crystals that create a sound when the cheese is cut or broken,
• The internal appearance of the cheese: colour of the mass, colour of the layer directly below the crust, tiny holes,
• Touch according to type of curing: between soft and grainy, between moist and dry, between elastic and firm
• Smell according to type of curing: between weak and intense, from milky to buttery, odours from some citric touch to those of dry fruits,
• Taste according to type of curing: from weakly salty and acid to clear salty and acidic; from short-lived taste to persistent

It is clear that each type of curing has its own criteria. One should taste any "Queso Majorero" with the necessary consciousness as all of them are a piece of local art.

The Elaboration of Queso Majorero.

The basis of the goat cheese obviously is goat milk. It is taken daily from the animals, kept cool in tanks and only hours later transported to the pasteurisation centre. Here the specific additions to coagulate the milk are added. The mass is then regularly cut to get particles of 5 to 15 mm of diameter. The liquid is then extracted and the mass is pressed into the round moulds. A subsequent pressing takes out the remaining liquid. When the cheese is taken out of the mould a further skin treatment with oil, salt, pepper or Gofio is done to give a special taste. The time of maturation goes from a couple of hours till 6 months or even more.

There are 20 listed producers of "Queso Majorero" and they are situated all over Fuerteventura. Here is a list:

The conclusion is very simple, but clear:

"If you didn't see the sun, didn't swim on the golden beaches, didn't bother to visit the beautiful places and didn't taste the Queso Majorero, then you haven't been to Fuerteventura."
Spirit of Fuerteventura wishes you an enjoyable tasting exercise! Buen provecho! Bon appetite!

Note: some information and components in this article have been collected from the "Consejo Regulador de la D.O.P. Queso Majorero and further from individual and personal tasting exercises.